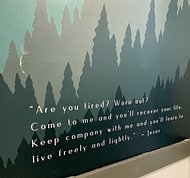 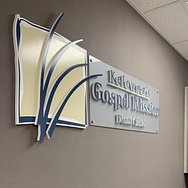 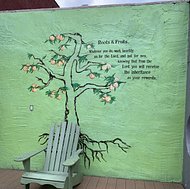 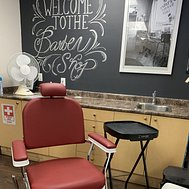 We are very excited to be raising funds in Kelowna for the Kelowna Gospel Mission!!

KGM offers a holistic approach to helping people who are experiencing homelessness. They provide more than just shelter to those with nowhere else to sleep - they also provide nourishing food and counselling services, access to dental care and free haircuts, laundry and shower facilities. Their outreach team shares healthy meals at various locations around the city, and they are raising money to fund new trucks to take the food around.

Homelessness in Kelowna is on the rise, and KGM is there for anyone in crisis.

Because of the ongoing pandemic, The Long, Long Night of Hope 2022 is continuing to raise money for Kelowna Gospel Mission shelter through St. John's Church in North Vancouver, while we seek a permanent home in Kelowna . Anyone interested in taking part should go to the Register tab and sign up!

"Walk a mile in your neighbour's shoes and you'll see

they're the same size as you.

There's no protected, no preferred,

Those are the lyrics to our theme song (copyright Christie Lee Smith).

Homelessness is not Hopelessness.

Someone asked, "What are we doing for the people living on the streets of North Vancouver?" The simple answer: not enough. When we got the crazy idea to sleep in our cars and raise money on social media, no one thought we would go very far.  Boy, were they wrong!

When that question was asked, parishioner Donna Lawrence knew she had an answer.  Peer-to-Peer (online) fundraising has been around for years, and was very successful at raising money for events like "The Ride to Conquer Cancer". She surmised that if St. John's was to get a handful of volunteers to raise money through Peer-to-Peer fundraising, and build awareness by sleeping in their cars, they could do something to help the homeless.

The first step was getting the church to agree to sponsor the event.  Donna spoke first to the priest, Rev. Patrick Blaney, and then to the Parish Council.  While they all gave the go ahead to proceed, Rev. Blaney later admitted, "I figured they might raise $1000, maybe a bit more."

With the church on board to host, next was deciding where the funds would go once raised.  After extensive research, the decision was made to donate all the proceeds to The Lookout Housing and Health Society's shelter in North Vancouver.  Donna reached out to their manager and presented the idea of the fundraiser, asking if they would be interested in being the recipient of any funds raised. Again, the manager later stated he figured they would be getting a few hundred dollars, but they were happy to get anything St. John's raised.

Seven enthusiastic volunteers registered for that first Long, Long Night of Hope, in February 2017. They took to Facebook and Instagram, they emailed friends, family and co-workers. Interviews were done with The North Shore News and with Global TV BC News.  And when those 7 participants gathered on a cold February night to sleep in their cars, they did so having raised $10,600 for the shelter. Having heard of the fundraiser, Donna's employer Rogers Communications added another $1000 for the Lookout Society.

The Long, Long Night of Hope has continued to grow.

In the second year, North Vancouver MLA Bowinn Ma joined us, and even spoke to the BC Legislature about LLNOH!  You can see the video of Bowinn's impassioned plea by visiting our Gallery tab above!

We have been blessed by partnership with our sister parish, St. Catherine's Anglican Church. They provided strong leadership and a second location for participants to join the activities of The Long, Long Night of Hope.

In just 5 years we have donated over $82,000 to The Lookout Society, with all funds staying on the North Shore to help people in our own area.

Cheque presentation to Kelowna's Gospel Mission Shelter and Lookout Housing and Health Society Shelter will took place in May 2021. THANK YOU!!

Plans for LLNOH 2022 have not been locked down yet, but we may be Sheltering in Place again as the pandemic surges on with new variants.  The safety of the participants is paramount, and we will be taking necessary steps to ensure everyone who takes part can do so and stay healthy.

LLNOH is looking for a Kelowna Parish to be a long-term home to the expansion of this fundraiser. Any Kelowna Anglican Church interested in taking part, please reach out to us at longlongnightofhope@gmail.com.